February 7, 2007 was the day that forever changed her life’s path.

Karen Mertes, a lieutenant colonel in our United States Air Force, was driving the speed limit on the interstate when she was struck by a drunk driver traveling over 100 mph. He had a blood alcohol level of nearly three times the legal limit. Both vehicles were totaled. Her axle snapped in half, with brakes and steering inoperative. Karen made a futile attempt to regain control of her vehicle as her car slid sideways down the interstate, with cars in the remaining lanes traveling by her at highway speeds. During these split seconds, as her life hung in the balance, Karen made a bargain with God. She promised God that if she were blessed to live, she would spend the rest of her life helping others. This was the genesis for what has become Fulfill Your Destiny, Inc. 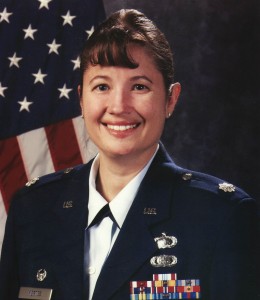 Although I did not realize it at the time, the events of February 7, 2007 created the genesis of my future non-profit corporation which would be known as Fulfill Your Destiny. On that date, my vehicle was struck at high speed by a drunk driver, totaling both automobiles. While I had a concussion, I was thankful I had survived without what I deemed to be a “serious” bodily injury. At the time of the collision, I was a lieutenant colonel in our United States Air Force, with a bachelor’s degree in mathematics and two master’s degrees in business administration and cost estimating & analysis. With top secret clearances, my work required every bit of the advanced education and 18 years experience I had accumulated. Following rehabilitation, I was released to return to work. It became apparent to me I could no longer perform the complex memory-driven cognitive tasks I could before the collision. I was diagnosed as suffering from a permanent traumatic brain injury (TBI), which affected certain parts of my brain.

Unfortunately, the parts affected were the same parts I had built my advanced education and career around. At that time, I knew I would have to start over and build a future around my strengths which remained. Through therapy and interface with a number of organizations in Tampa Bay, I learned that this “hidden injury” had stolen the careers and lives of significant numbers of people, many of whom were military who suffered TBI’s in our conflicts in Iraq and Afghanistan. At that time, I vowed to help people suffering traumatic brain injuries as well as other traumas, whose careers and educational paths have been cut short. My 501(c)(3) non-profit corporation is Fulfill Your Destiny.
Karen R. Mertes, Lt Col (Ret), USAF
Founder & President, Fulfill Your Destiny, Inc.

You can find Karen’s book, Plaintiff 101, by clicking here.